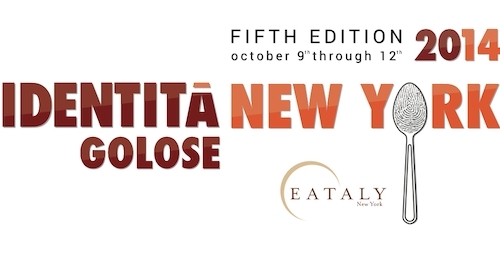 Next Thursday the 5th edition Eataly. A comparison between generations of chefs

Opens, Thursday, October 9, 6:30 pm local time, with a joint lesson from Lidia Bastianich and Rosanna Marziale the fifth edition of Identity New York, a 5-days with 7 lessons at 2:02 dinners in the Brasserie at Eataly NY ‘ He teaches the intergenerational confrontation between intercontinental and cooks. Registration and details here

Another few days and it will open inside Eataly, at number 200 5th avenue, the fifth edition of Identity New York, a meeting / confrontation between 7 chefs that make great catering and 7 of the American metropolis that do honor to Italy . “If last year”, intruduce the leitmotif of this year’s Paul Marks, “this talk, think and understand each other occurred at the level of products, this fall will go to the level of ideas in the sign of a confrontation between different generations. Exercise more difficult to go for generations because the chronological age is not in itself synonymous with quality or downward. It ‘more easily a cue to discuss and go deeper and deeper. ”
“The intention is to make a duet with each other chefs who share their time professional, the best today and that will be the best, supernovae and stars just beginning, to allow everyone to understand what feeds the soul and kitchen who rises from the media and in time become a real reference point, not an ephemeral fashion. ”

“Fourteen figures around, the superchef to think and cook gratified by the prestige built up over time and the first star chef to draw strength from the enthusiasm that drives those who have just started an important career path and leave the known behind to add her. Seven lessons, certainties and bets, the idols and novices, sometimes the teacher and the student because it can also happen that the young tend to break away from the great culinary schools rather than get in the heels, ready to give them new sap “.

And with the lessons, the inevitable double date with the dinners during which the Italian guests, and not only they, will give the best of themselves to make it clear that Italian cuisine is not firm and nailed to the past but is able to walk in forward in a continuous search of the best, at home and in the same Manhattan.

The event hashtag is # identitaeataly